In the first part of this series we developed a simple blogging
application that uses event sourcing to keep track of all changes made by the users. However, we did not yet write these events to durable
storage. This means all data is lost when the application is restarted, which is clearly not acceptable. Saving and restoring events will be the
responsibility of the event store, which we’ll start implementing in this part. But before we get to actually writing events to disk, we must first
tackle the problem of maintaining data consistency when using event sourcing.

You can find the code on github in the part-2 branch. Use git clone -b
part-2 https://github.com/zilverline/event-sourced-blog-example.git to checkout the correct branch. If you already retrieved the previous part, then
using git pull and git checkout part-2 should do the trick.

Living in a distributed world

Something you’ll quickly have to learn when you develop web applications is that the internet is a truly distributed environment. You’ll often run
your application across multiple servers (for performance and/or fault-tolerance), while users access your application from different devices all
across the globe. All of these servers and devices will have a different view of the world. In a distributed world there is no such thing as a single,
global truth. As soon as a web page is rendered by a server and the page is displayed by the client, the data on the page is already out of date. If
you do not handle this correctly, some surprising things may happen.

An easy way to see this is to start editing a blog post, then use another browser window to delete the same blog post, and then submit the original
edit form. In the application from part 1 this results in a NoSuchElementException while processing the event to update the current state. In the
Rails getting started application you get a ActiveRecord::RecordNotFound. Other frameworks
that I know of aren’t any better at handling this. Back button usage and double-clicking also causes many of the same problems. And the more
collaberative your application is, the more likely it is that these inconsistencies and conflicts will occur for real.

Many current web applications deal with this by relying on a combination of ad-hoc solutions, prayer, and luck1. You just have to hope that the
occasional lost update, exception or other glitch won’t cause too much trouble.

Since events are forever, we cannot afford to let these glitches go undetected. Otherwise we could get strange, meaningless event sequences, such as
having a blog post being edited after it has been deleted! So one major responsibility of an event store is to detect these conflicts and prevent
storing inconsistent events.

To implement this our event store is going to keep track of multiple event streams. Each event stream has an associated stream revision, which is
defined to be equal to the number of commits for that particular event stream. This makes the stream revision a gapless, strictly increasing sequence
number.

We use multiple event streams so that commits that go to different event streams do not conflict: each event stream defines a consistency boundary. In
our example application we’ll map each blog post to its own event stream. So editing or deleting two different posts never cause conflicts.

There is another problem that we have to solve, related to using a memory image. In a database oriented application the central database is considered
to give a single, up-to-date, consistent view of the current state of the application. Database transactions are used to control concurrency conflicts
(but make sure you choose the correct isolation level!). Since the database is a single,
centralized component any read after a transaction commit will return the updated data (until you introduce master-slave replication or caching). 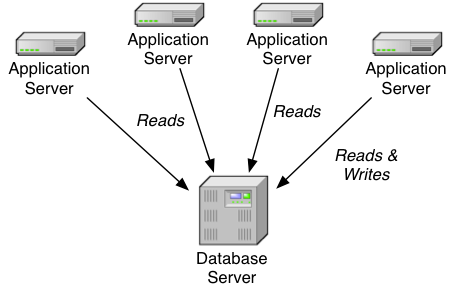 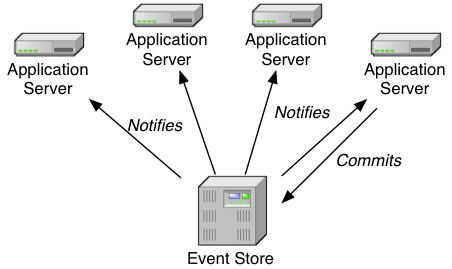 So to avoid having a fast client not seeing the results of the action they just performed, we’ll also keep track of the event store revision, which
is defined to be equal to the total number of commits to the event store. Again, this produces a gapless, strictly increasing sequence
number. Whenever a client is redirected to see the results of a commit, we’ll check the current store revision to check if our memory image is
up-to-date.

There are a couple of ways to implement this:

The store and stream revisions are represented by the StoreRevision and StreamRevision classes and can be found
in EventStore.scala. They simply wrap a Long
value. The main reason not to use plain Longs is to avoid accidental mixups. Plain numbers that are related but actually mean different things are
hard to keep straight otherwise!

Committing events to the event store uses the EventCommitter interface:

The tryCommit method will attempt to commit the given event to the event stream. The result type is defined as follows:

You may have noticed that the Commit class allows for multiple events in a single commit. This can often be useful if you want a group of events to
be treated atomically by subscribers. Another reason for this is that as your application evolves some events may no longer be of interest. These
events can then be filtered out without altering the store or stream revisions the commit is part of. In other words, you may have commits that no
longer hold any events!

To rebuild the memory image and receive commits as they happen the CommitPublisher interface is defined:

After subscribing to the event store all commits that happened after the since store revision will be passed to the listener callback. The event
store will ensure that commits are send to the listener in-order and without any gaps or duplicates. Notice that notification of commits happens
asynchronously.

The CommitReader interface allows access to stored commits (using Scala’s lazy Streams to avoid having to load all commits in memory at once) and
the EventStore interface simply combines the other interfaces and a close method into a single unit.

The FakeEventStore implementation can be found
in FakeEventStore.scala. It uses a
simple Vector (Scala’s immutable equivalent to Java’s ArrayList) to store all events committed to the store and a map of streamId to Vector
for the commits associated with each event stream. All commits are stored in their original order. Scala’s Software Transactional Memory (STM) is
again used to ensure consistency:

The CommitReader implementation just uses regular Scala collection manipulation functions. Notice that the implementation of storeRevision is
precisely the definition of a store revision as discussed in “read consistency” above! The streamRevision and readStream methods (not shown) are
implemented similarly.

First a check is done to ensure that no STM transaction is currently active, to make sure that we correctly mimic a real event store. Then the
expected stream revision is checked against the actual revision. If there is a mismatch a conflict or error is reported. If they match, a new Commit
is instantiated and appended to the commits and streams collections. The new commit is then returned. All this is done inside a STM transaction to
ensure atomicity.

The final part of the event store implementation deals with notification and is the most tricky. STM again helps to keep complexity under control:

The closed reference is used to communicate that the event store has been closed. The executor thread pool is used to run each subscription on its
own background thread2 so that we can correctly mimic a real event store.

When a subscription is made, we create two more references: cancelled to communicate that this subscription has been cancelled and last to keep
track of the last commit that has been passed to the listener.

A notification thread is then started that continuously checks if there are any new commits that the listener needs to be notified of. If there are
none, the STM transaction is retried. Retry internally uses blocking to avoid
needless looping to check for new event store commits.

The memory image itself is now implemented in
its own class. It basically wraps an
EventStore while allowing access to the current state.

The memory image takes three constructor parameters: the event store, the initial state, and the update function that takes the current state and a
commit to produce the updated state. The memory image also implements the EventCommitter interface and simply passes any commit attempts to the
underlying event store.

The get method first checks if the current memory image is up-to-date. If it isn’t, it blocks until the required number of commits have been
applied. Otherwise it simply returns the current state. This ensures the required level of read consistency.

When the memory image is instantiated it also subscribes to the underlying event store and uses the provided update function to ensure the current
state reflects all commits received from the event store.

Now that we have a (fake) implementation of the event store, we can start adjusting the PostsController to use it to store events. Before we simply
had a posts reference to the latest data and a commit method to commit events. We’ll re-implement these to use the memory image:

As you can see the commit method parameter list was expanded to include the expected stream revision and a callback used to render an HTTP response
if the commit succeeds. However, if a conflict is detected an HTTP 409 (Conflict) status code is returned. Giving the client detailed information on
the conflict is not implemented yet, so we simply render a todo page.

The controller actions that generate events are all related to HTTP POST requests and need to be adjusted to handle the new expected stream revision
parameter and conflict response. Since only the client knows the revision used to render the page by the time the POST request is submitted, the
expected stream revision is added as a new URL parameter. Listed below are the show and submit actions related to the “edit post” page:

Compared to the previous version
there are two main changes:

Since Play! 2 view templates and URLs are strongly typed it is also impossible to forget to pass this additional expected revision parameter,
something that can happen easily with many other solutions, such as hidden “version” form fields.

Since we need to know the current revision of a blog post when rendering the edit or delete actions we need to keep track of this in our model
classes. This is done by adding a new field to
the Post class and setting this based on the stream
revision associated with the event:

This concludes our tour of the code. There were only minor changes to the code related to the application functionality, as most of the code is
related to introducing the event store as a piece of application infrastructure.

Introducing the fake event store causes about a 3%-10% drop in performance compared to having no event store at all. Writes were affected the most,
while read performance is almost the same. This is to be expected, since writes now use a background thread to update the memory image, while reads
only add a quick check to the memory image to see if it is up-to-date with respect to the event store. Of course, we’re still not persisting the
events to durable storage so we are mostly CPU bound. Writing to disk will obviously introduce new bottlenecks and we’ll go into a more detailed
performance analysis in the next part.

In the next part we’ll use Redis to implement an event store that will actually write the events to durable storage and will be
used to replay the events to restore the memory image when the application server is started.