In the previous part we added blog post comment
functionality. In this part we’ll do some refactoring and change the memory image implementation to automatically retry domain logic on optimistic
locking conflicts, giving us a simplified form of transactions. We’ll also change the event store to support multiple types of event streams in a
single event store.

You can find the code associated with this part at github on the part-5
branch.

The main changes we want to make before improving the current commit code to handle transient conflicts is to move it out of the PostsController,
so that we use it from other parts of the application. But the current implementation is tied directly to Posts and PostEvents. So first we remove
the following dependencies from this method:

To solve the first problem we introduce a new trait ConflictsWith:

ConflictsWith is a type class that defines how to resolve conflicts
for a certain type of events. By making it a separate trait (instead of a function) the Scala compiler can automatically pass implementations as an
implicit parameter where needed. The definition of the Conflict class has
also changed slightly, to make it easier
to filter the events while preserving meta-information.

The apply method of the ConflictsWith companion object is helpful to create instances of ConflictsWith based on a simple predicate. The
predicate must check if two events conflict or not. The PostEvent conflict resolution implementation becomes:

We use Scala’s convenient partial function syntax to define all the
cases, without having to explicitly use the match keyword.

To solve the second and third problem, and to support different type of event streams in a single event store, we introduce another trait EventStreamType:

Now that we’ve associated an event streams identifier type with the event type using the EventStreamType trait, we can make our event store
contra-variant. In other words, when we have an event store of type EventStore[DomainEvent] we can use it as an EventStore[PostEvent], if
PostEvent is a subtype of DomainEvent.

But we can only do this by changing event store methods that return events to take into account the EventStreamType, otherwise the Scala compiler
will not allow us to treat a EventStore[DomainEvent] as a EventStore[PostEvent] (since reading from such a store could return DomainEvents,
while the caller would only expect PostEvents). So the definition of CommitReader becomes:

Other methods in the event store traits are similarly changed. The methods can be used much like before, except that you'll have to provide the
expected event type (readCommits) or that Scala will look for an appropriate instance of EventStreamType (readStream):

Here the Scala compiler knows the type of myPostId and will infer that the events must be of type PostEvent1, based on the existence of
PostEventStreamType. So Scala will correctly infer the type of myCommits to be Stream[Commit[PostEvent]], so you will not have to do any type
casting.

Another change is that we introduce a new Changes type that combines the three parameters provided to the event store committer’s tryCommit method
(streamId, expected stream revision, and the event to append). The interface is:

So besides the three parameters it also captures the type of the stream identifier and the associated EventStreamType instance, so that only events
of the correct type can be committed to the event stream. The withExpectedRevision returns a new copy of the changes with an updated expected
StreamRevision, which is useful for retrying a commit in the case of resolved conflicts.

With all these changes in place we can get back to solving transient transaction conflicts.

Going back to our application’s storage architecture the following picture emerges:

Remember that in the blog post application there is one event store, each with many memory images (one per application server), all concurrently
committing new events, based on the actions performed by the users. We already detect the conflicts that can occur when users work with (potentially)
outdated information by comparing the expected stream revision to the actual revision (see
the previous part for more details). Let’s call these kind of conflicts user
conflicts.

But by adding the blog comment functionality we introduced a potential conflict in the interaction between the memory image and the event store. In
the
add comment action of PostsController we
first read the current state of a blog post and use it to assign a CommentId to the new comment. We then commit a CommentAdded event. If multiple
users happen to add comments to a blog post simultaneously, an unresolvable conflict will occur: both new comments will have the same id. This is a
transaction conflict2.3

In the current version of the application the commit fails and we’ll notify the user that someone else added a comment with the same id. The user must
then resubmit the comment, which will then succeed. But why ask the user to retry an action for these kind of transient conflicts, when computers
are much better at doing repetitive work automatically?

What we have to do is to automatically rerun the code that reads the memory image and then generates the event. So we will replace the MemoryImage‘s
tryCommit method with a new modify method:

The possible values for a Transaction are shown below:

The TransactionCommit and TransactionAbort (not listed) are simple case classes to hold parameters until we are ready to commit (or abort) the
transaction. The ChangesOps enriches the Changes class with a new commit method that
instantiates a TransactionCommit (Scala 2.10 will offer a nicer syntax for “extending” existing classes with new methods
using implicit classes). Values of type Option[Transaction[Event, A]] are also
extended with the sequence method, which flips the optionality to return a Transaction[Event, Option[A]]

To modify the memory image safely, we can now write code like:

The flow chart below describes the full MemoryImage modify algorithm, including user and transaction conflict resolution: 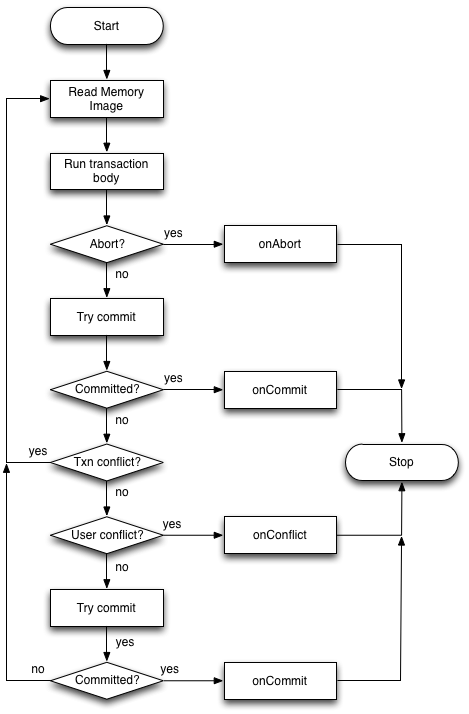 That’s quite a few steps! Let’s go through each step in the left column:

This entire process is implemented
in MemoryImage.modify. The method is a
bit larger than I would like, but it seems to be one of those cases that don’t get any more understandable when split up into smaller pieces.

Now that we have basic transaction support in place we can modify the controller methods to work with this. Here’s the post edit action together with
the updatePost helper method:

As you can see, if the form validation fails, we abort the transaction and return a BadRequest as usual. Otherwise we return a commit result with
the PostEdited event and the appropriate onCommit and onConflict handlers.

With the addition of the modify method to the MemoryImage we now have a place to put domain logic. Since the example application’s logic is still
extremely simple, we can just keep it inside the PostsController. As your application gets more complicated, you should extract the domain logic
into separate functions and classes.

The event store (and memory image) now also support multiple types of event streams. We’ll use that in the next part to add user accounts to the
example application. We’ll also look into ensuring uniqueness of the email addresses associated with these user accounts.